Scientists think more planets could be home to aliens 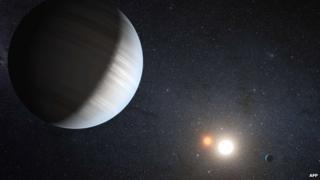 A new computer model has shown that there may be more life on other planets, which were thought to be inhabitable.

Researchers in Aberdeen say the tests have helped them to find out more about what's lurking beneath the surface of far-away planets.

They've been looking for water, which is needed to support all living things.

In the past if no water was seen on the surface of a planet then it wasn't thought to be home to any living things.

But now they've discovered that water supplies filled with life can be found deep below a planet's surface, like here on Earth.

Professor John Parnell, who is leading the study said, "There is a significant habitat for microorganisms below the surface of the Earth, extending down several kilometres.

"And some workers believe that the bulk of life on Earth could even reside in this deep biosphere."