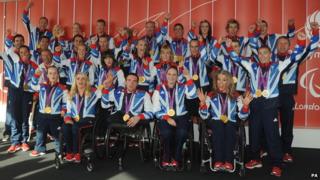 ParalympicsGB finished the London games with a mega 120 medals - and they're being tipped to do even better in Rio.

The final total was 18 medals more than the squad brought back from Beijing, putting them in a brilliant position to do even better in four years' time.

Ones to watch for in Rio

One of the top ParalympicsGB bosses reckons that the key to success will be that so many of them are so young.

Top Para boss Penny Briscoe said, "Fifty-four of our medallists are 22 or under... It all bodes well for Rio."

Jonnie Peacock and Ellie Simmonds, both under 20, are two of the eight gold medallists who are tipped to bring home even more medals in 2016.

The team finished third overall in the medal table, behind China and Russia.