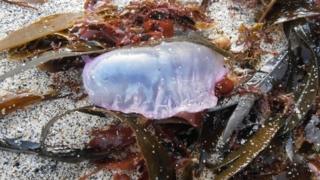 Strange creatures called Portuguese men-of-war have washed up on beaches in Cornwall, according to the council.

There have been 13 sightings in Cornwall and the Marine Conservation Society (MCS) said more people were seeing them.

The Portuguese man-of-war is not a jellyfish but is closely related. Each one consists of many tiny organisms behaving collectively as one animal.

It can sting too causing severe pain and sometimes it can be fatal. 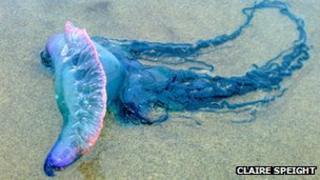 The Portuguese man-of-war usually lives in the warm seas of the Indian Ocean, Caribbean and Pacific.

Dr Peter Richardson, MCS Biodiversity Programme Manager, said they "Look a bit like a deflating purple balloon with blue ribbons attached" and may attract the curiosity of children.

But don't be tempted to touch one because they can "Deliver an agonising and potentially lethal sting".