US President Barack Obama launches fight to stay in job 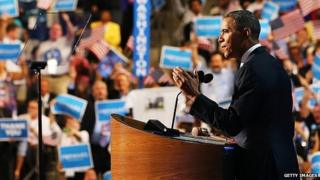 US President Barack Obama has made a big speech launching his fight to stay in the White House for four more years.

He said America faced a choice between two different visions of the future - him or Republican rival Mitt Romney.

Obama talked about his "real achievable plans that will lead to new jobs, more opportunity and rebuild this economy on a stronger foundation".

He was speaking at the Democratic National Convention, the big meeting for his political party.

Obama's been officially nominated as the presidential candidate for the Democratic Party. 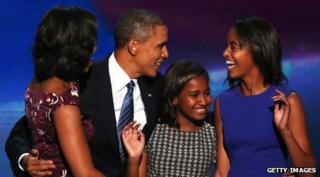 Getty Images
President Obama on stage with his family

In his speech, he promised the audience: "Our problems can be solved, our challenges can be met, the path we offer may be harder but it leads to a better place.

"Goals in manufacturing, energy, education, national security and the deficit."

People in America will decide who should be their president when the election takes place in November.

Mitt Romney's team hit back at Obama's speech: "He offered more promises, but he hasn't kept the promises he made four years ago."