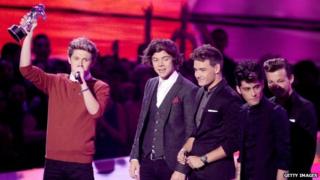 One Direction stole the show at the MTV Music Video Awards, taking away THREE prizes!

What Makes You Beautiful won the boys Best Pop Video and Most Share-worthy Video, as well as Best New Artist.

Niall said: "We've grown up watching this show and to even be here is an honour, and to collect one of these on behalf of our fans is absolutely incredible."

1D performed One Thing to screaming fans at the event in Los Angeles, USA.

One Direction are big news in America. Their debut album went straight to number one there in March - the first ever British group to do so.

Rihanna grabbed the big prize of the night - Video of the Year for her hit with Calvin Harris, We Found Love.