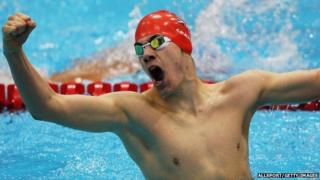 The schoolboy from South Shields won the 400m freestyle S7 gold on Thursday evening in the Aquatics Centre.

He did it in style too - Craig finished in four minutes 42.81 seconds to smash his own world record, which he set during his heat earlier that day!

The teenager, who has cerebral palsy, said: "I was quite shocked when I looked around and saw the time."

He added: "It means more than anything in the world. It's the happiest day of my life."