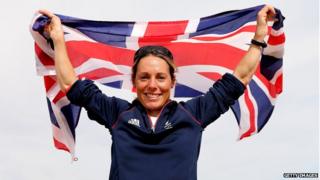 The 37-year-old sailed to victory in the 2.4mR class in Weymouth, and was the only woman in the competition.

The final day of the event was cancelled because the winds were too light, meaning that Lucas didn't need to race again to secure her win.

It was a good day all round for the British sailors, Alexandra Rickham and Niki Birrell won bronze in the Skud class.

Lucas finished in seventh place at the Beijing Games four years ago and is the three-time World Championship bronze medallist.

She was born with defects in both thumbs and races in a keel boat, which she can control with one hand.