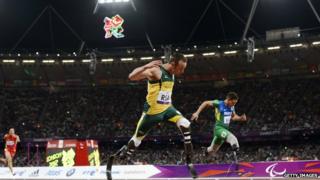 Oscar Pistorius got his first gold medal of the 2012 Paralympics by leading his South African T42-46 4x100m relay team's victory.

The South African team won on Wednesday evening in a new world record time of 41.87 seconds.

A few days earlier the 'blade-runner' missed out on a gold medal in the T44 200m.

He then complained about the length of his opponent's blades, claiming they were "not running in a fair race".

But the South African later apologised for making his outburst straight after the race.