Andy Carroll injured and out for six weeks 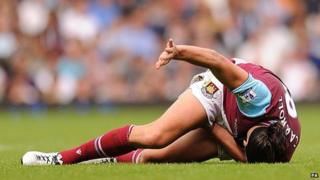 West Ham striker Andy Carroll won't be able to play for between five and six weeks after injuring his hamstring.

The 23-year-old limped off the pitch 68 minutes into his debut match against Fulham.

A scan has revealed that Carroll's hamstring injury is serious, ruling him out of one Capital One Cup and four Premier League games.

Carroll joined the Hammers on loan from Liverpool last Thursday.