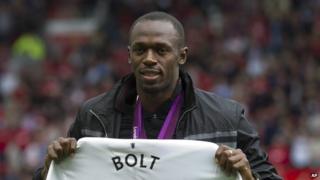 We already know he's the fastest man on the planet but could Usain Bolt also be a top player on the football pitch?

Bolt, the six-time Olympic champion, has talked in the past about his dreams of playing for his favourite team, Manchester United.

In an interview with Inside United magazine, Ferguson said, "It's interesting he says he'd like to play in a charity game."

"It could be brilliant, and next year when we play Real Madrid's Legends again, there could be opportunities to bring him up and see how he does."