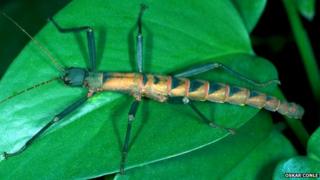 A smelly new species of stick insect has been discovered living in the Philippines.

It has no wings and lives on the ground instead of in trees - and it's spectacularly coloured!

It's so unique that scientists haven't been able to work out its relationship to other stick and leaf insects yet.

The insect was found on the third-highest mountain in the collection of islands.