Why is marching so important in Northern Ireland? 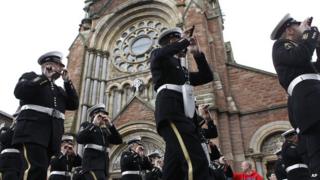 Parades by Protestant and Catholic groups happen right across the UK, but they cause tension in Northern Ireland.

The marches celebrate battles and victories between different sides, some of which happened hundreds of years ago.

Since those battles, Catholics and Protestants have got used to living in certain areas within the country.

And that means when the traditional marches take place, they often pass through areas lived in by members of opposite sides.

Loyalists and nationalists - what do they want?

A group of people, called a commission, was set up in 1997 to oversee the marches and try to prevent violence.

But the clashes haven't ended completely.

In July 2012 trouble started when a parading loyalist band was filmed playing a song, which Catholics found offensive, outside a church.

Tensions grew over the weeks that followed, and eventually boiled over into violent clashes in early September. 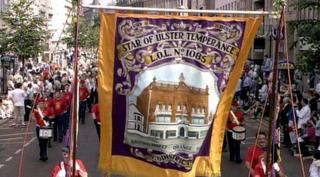 Bands also play traditional tunes which have been sung to celebrate the past battles.

But that can make people from the opposite side upset or angry when they see the banners or hear the songs, as the parades pass by their houses.