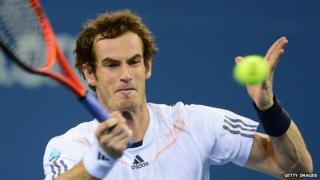 Andy Murray booked his place in the last eight of the US Open tennis after a convincing win against big-serving Milos Raonic.

Murray cruised to victory over his 21-year-old opponent 6-4 6-4 6-2 to reach his eighth Grand Slam quarter-final in a row.

The Scot didn't have to face a single break point as he dominated Raonic from start to finish.

The 25-year-old will now face 12th seed Marin Cilic of Croatia on Wednesday.

Raonic had won their only previous meeting - at April's Barcelona Open - and came into the match with 89 aces in the tournament.

"Milos has a huge game," Murray said. "I got lucky a couple of times but hit my passing shots very well.

"Sometimes the serves fly past you, sometimes you get a racquet on them. I tried to stay focused for every point and did a good job of that."

Elsewhere, Roger Federer was awarded a place in the quarter-finals after his fourth round opponent Mardy Fish withdrew for health-related reasons.