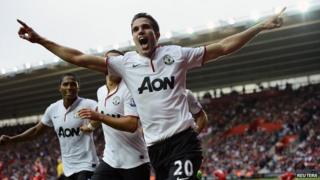 A late hat-trick from Robin van Persie helped Manchester United come from behind to beat Southampton 3-2.

Rickie Lambert headed the Saints in front in the first half, before RVP equalised at St Mary's.

After the break, Southampton's Morgan Schneiderlin helped put the hosts into a surprise lead.

Van Persie then missed a penalty but made up for it by scoring two goals in three minutes to seal the win.