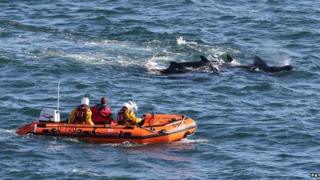 Ten pilot whales saved after becoming stranded on the east coast of Scotland are being closely watched by rescuers.

A pod of 26 whales beached between Anstruther and Pittenweem in Fife on Sunday and 16 of them died.

But vets managed to keep 10 of the six metre long mammals alive and they were floated back into the water.

Rescuers are keeping a close eye to ensure they don't beach again. The hope is that they'll join up with another group of whales further down the coast.

Vets are still trying to work out how the whales became stranded in the first place.