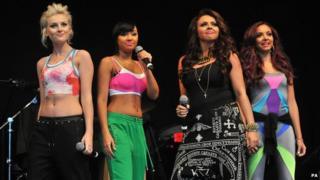 X Factor winners Little Mix have flown straight to the top of the charts with their new single Wings.

It's the girls' second number one hit, after their debut song Cannonball in December.

Jesy said it was incredible: "This has been the best week ever. We feel like Wings is our baby that we've been waiting to unleash on the world."

The band have confirmed that they'll be doing their first headline UK tour, kicking off next January.

Over in the album charts, Rita Ora has entered at number one with ORA.