Workers at a mine in South Africa have been charged with the murder of their colleagues, even though they were shot by police.

State prosecutors have used a law called 'common purpose' to charge the 270 workers.

But it's caused outrage and the country's justice minister has asked for an explanation. 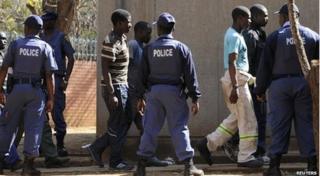 The shooting is the most deadly police action since 1994 - when South Africa became a democracy.

Police said they were acting in self defence.

Under the common purpose law, it means the 270 miners can still be charged because they threatened police, even though they didn't kill their co-workers.

The law was used during the apartheid era, to stop black people from protesting against the white ruling minority.

Between 1948-1994, apartheid kept black and white people separate in the country and caused loads of clashes with the police.