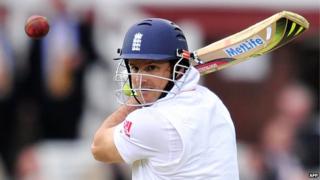 Andrew Strauss has quit as captain of the England test cricket team.

The 35-year-old batsman has said that he will retire from all professional forms of the game.

He said: "It has clearly been a tough decision to make but I believe that it is both in the best interests of the England cricket team and myself to step down".

As captain Strauss led the team to two Ashes victories and helped them top the world rankings for the first time.

The team won 24 out of 50 tests under his leadership, making him the second most successful captain in history after Michael Vaughan.

But recently he's struggled to make an impact with his batting, scoring just 107 runs in three test matches and England were knocked off the top of the rankings by South Africa.

Alistair Cook has been named as his replacement to captain the test squad, he's already in charge of the one-day side.