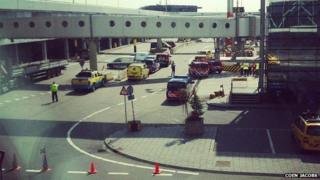 One of Europe's busiest airports has been evacuated after a bomb was discovered.

The explosive device was found by workers digging near one of the runways at Schiphol airport in Amsterdam.

Experts think that the bomb may be from World War Two, when the airfield was used by Nazi Germany.

It has now been taken away by a bomb disposal team to be detonated safely.

Unexploded bombs from the Second World War are found quite often in parts of Europe.

Earlier this week, an American bomb was detonated by bomb experts in the German city of Munich.