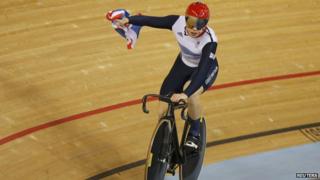 Burglars have stolen the bike of one of Team GB's gold medal winning cyclists Phillip Hindes.

Hindes, who was part of the team sprint squad alongside Sir Chris Hoy and Jason Kenny, used the bike to train on.

His car was also taken by burglars from his home in Manchester.

Police think the thieves may have stolen the bicycle to sell on to specialist sports collectors.