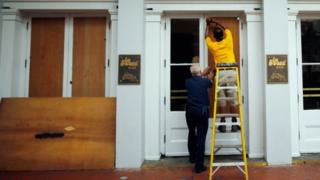 America is preparing for a hurricane which is set to hit on Tuesday night.

President Barack Obama has declared a state of emergency in the state of Louisiana as Hurricane Isaac approaches.

Isaac was classed as a tropical storm but got more powerful and is now categorised as a hurricane.

It killed at least 24 people in Haiti and the Dominican Republic, and caused a lot of flooding and damage across the Caribbean.

Evacuations have already been ordered for some low-lying areas of Louisiana and Alabama.