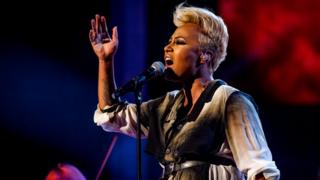 Adele watch out! Emeli Sande has kept the number one slot in the UK album chart and is closing in on the biggest selling album of 2012.

Our Version Of Events has sold nearly 647,000 copies since its release in February, just over 6,000 copies behind Adele's 21.

Sande performed at the opening and closing ceremonies of the London Olympics.

In the singles chart, Sam & The Womp landed a debut number one with Bom Bom.