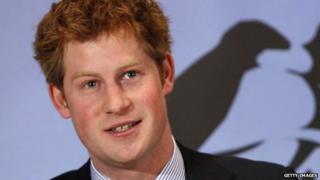 A British newspaper has printed photos of Prince Harry naked.

The embarrassing snaps were taken on a camera phone in a hotel room while the Prince was on holiday - and were put on the internet.

On Thursday, newspapers didn't print the pics because Buckingham Palace said that if they did, they would be breaking privacy rules.

But now 'The Sun' has put them in Friday's newspaper, saying newspapers should have the freedom to print them.

There are rules over what Newspapers can and can't print and a group called the Press Complaints Commission are meant to make sure they aren't broken.

One of the rules is that things that happen in private, should stay private.

So that means that photos taken in a private area like a hotel room shouldn't be printed for all the world to see in newspapers.

But The Sun argues that because anyone could see the pictures on the internet, it wasn't fair that they aren't allowed to print them.