Are camera phones a bad thing? 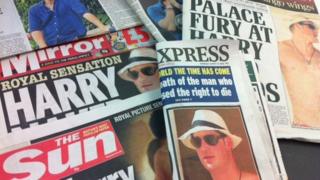 Embarrassing pictures of Prince Harry at a party have been published on a website in America.

They show him naked in a hotel room and look like they have been taken on someone's mobile phone.

In the UK the law protects people's right to have a private life but sometimes the media argues that if the person is famous what they do in their own time can be revealed in public.

The papers in the UK have chosen not to publish the pictures.

Some people say the papers are worried about upsetting people after the phone hacking scandal where some journalists illegally listened into people's private phone conversations to get stories.

"I don't think it's right. I'm turning eleven, and kids should not be allowed camera phones. It's wrong to take pictures and publish them. Prince Harry can't trust his friends if they did that. This is ruining his reputation."

"I think camera phones are perfectly safe and should not be banned they are also useful for remembering things that you can't write down or draw."

"I think that we should have camera phones but I don't think we should use them to display personal stuff about other people."

"I think that camera phones aren't bad, but some things shouldn't be revealed to the public. People should have privacy rights."

"I don't think it was right at all that Prince Harry was photographed, that was his private life."

"I think that as long as people use them responsibly, they are fine to have."

"I think camera phones are a good thing because it makes it easier to send your friend a photo from your mobile phone than it is on a camera. However, people should use them appropriately and there should be a law stating not to take pictures of inappropriate things."

"I don't think they are a bad thing because if there was a crime committed and you were there you could take a picture as evidence."

"I think camera phones are good because if you forget your camera you have your phone as a backup, but people should know how to use them maturely."

"I think it should be illegal to take photos of very inappropriate things."

"I think camera phones are okay for when you don't have a real camera with you and you want to catch a memorable moment. But I think celebrities deserve the right to have privacy - after all, deep down they are just normal people."

"I don't think camera phones are bad, it's just a matter of using them responsibly."

"I think that camera phones are a good thing because you can take photos of your friends and family. I think should be illegal to take pictures of the public if they don't expect it."

"I think that photo phones are a good thing because if you have your friend's number you need a photo for their contact and more or less every phone now has a built-in camera. On the other hand some people can be silly and take inappropriate photos."