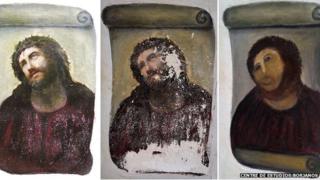 An 80 year-old woman's painting skills have caused a storm in Spain for all the wrong reasons.

The old lady decided to try and fix a famous painting of Jesus Christ after it was damaged by water.

But her art skills weren't quite up to scratch and the 100 year-old picture ended up looking pretty bad.

Officials say that she acted with good intentions and hope that they'll be able to properly repair it soon.

They say if they can't then they'll cover the wall with a photo of the painting.

After starting to repair the picture the woman realised that she was out of her depth and contacted cultural officials in Zaragoza in the north of the country.

The picture isn't thought to be very valuable but is important to people living in the area.

To make things worse, the local cultural centre had just received a donation from the painter's granddaughter which they had planned to use to restore the original painting.