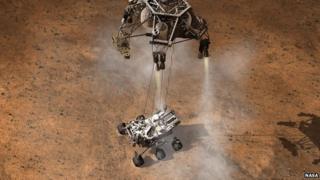 Nasa's Curiosity rover is the latest in a string of robots we've sent to explore the surface of Mars. But what's it actually looking for? Here's our guide.

Curious facts about the Curiosity rover

•It took eight months to travel from Earth to Mars.

•Its top speed is about 4cm per second.

•It has two onboard labs to analyse rock samples it collects.

•It has 17 cameras which take photos and send information back to Earth.

•It has 75kg of scientific equipment which is more than 10 times as massive as earlier US Mars rovers.

What is it trying to find out?

The main aim of the mission is to find out if Mars has ever had the conditions to support life.

What can it do?

It can take pictures, collect samples and analyse the surface of the planet and then beam the information back to scientists on Earth.

Why is it special?

The rover is the biggest and most hi-tech robot ever to be sent to the Red Planet.

How much is the project costing?

The project is costing about $2.5billion, which is about £1.6bn.

How long will the mission last?

The first stage of exploring the surface will last for two Earth years but the rover has its own power source which will give it heat and electricity for at least 14 years. 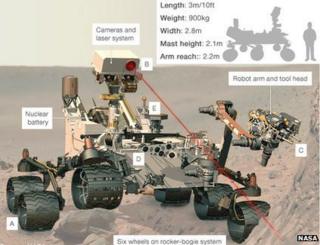