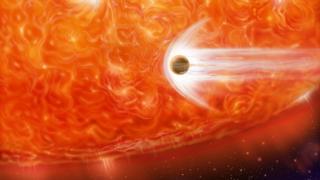 Scientists have found evidence to show how a planet has been destroyed by a massive star.

The star, which is similar to our Sun, expanded and 'ate' up a planet near it.

Astronomers found that the chemical makeup of the star had unusually high levels of the metal element lithium suggesting that a planet had been pulled into it and digested.

Also a nearby planet changed its orbit, which suggests that the loss of the other planet pulled it off course. 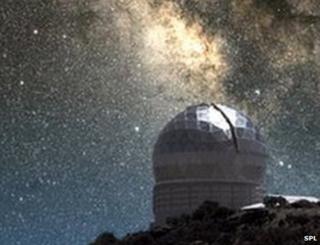 The discovery was made by a group of astronomers from America, Poland and Spain using a massive telescope call the Hobby-Eberly which is based in the southern US state of Texas.

The star is called BD+48 740 and is a red giant. As stars age they heat up, causing them to grow bigger; and planets near them can then be eaten up by the boiling gases.

Our Sun is a star and will one day become a red giant that could eat up the Earth - but don't worry: that won't happen for about another five billion years...