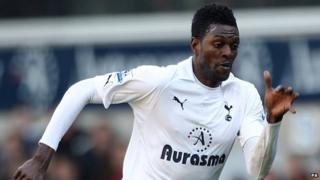 It's thought the striker is now one of the highest-paid stars at White Hart Lane, earning a reported £100,000 per week.

But City are having to top up his wages, because Spurs have refused to break their wage cap for him.

Adebayor had signed for Manchester City for £25million back in July 2009.

He didn't want to take a pay cut to go to Tottenham, which is why City have to top up his wages to complete the deal.

The former Arsenal forward broke the news of his transfer on Twitter, tweeting: "Tottenham here I come! I'm hungry for goals. Get ready."