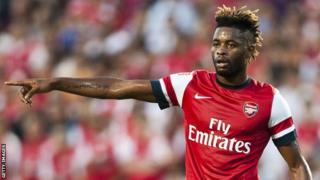 Song is the latest in a long line of big names to have left the Gunners in recent seasons.

Arsenal boss Arsene Wenger said: "It's always frustrating losing good players, but we have plenty of players in midfield."

Song, who's 24, signed a five year deal with Barca who are keen to reinforce after missing out on the Champions League and League title in Spain last season.

"I'm very happy to be here, this is the best team in the world. Playing at a club like Barca is something I wanted when I was young," he told Barca TV.

"I hope the team will continue to win, this is a winning team. They win everything."

Arsenal look close to signing a possible replacement for the Cameroon midfielder with Turkish international Nuri Sahin close to joining from Real Madrid on loan.

Arsene Wenger added: "We are looking to bring one more midfielder in, and maybe one defender as well because we still feel we are short in some positions."