Nasa plan another Mars robot to launch in 2016 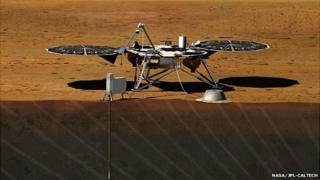 Curiosity has only been on Mars for two weeks but Nasa is already making plans to send another robot there in 2016.

Unlike the Curiosity rover, which moves around, the new InSight spacecraft will stay in one place and listen for "marsquakes".

They are shudders in the ground, similar to earthquakes, and will help scientists discover if the planet has a liquid or solid core.

This will then allow them to understand more about how Mars was formed.

Scientist Tom Pike, who is working on the mission, said: "This is not going to be a mission of pretty pictures like Curiosity.

"When we get the first marsquakes I think that is going to be a really cool data set."