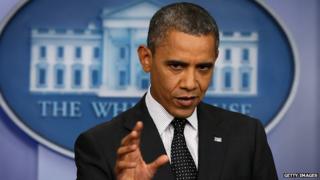 American President Barack Obama has warned Syria there will be big consequences if they try to use chemical weapons against their own people.

Thousands of people have already died in fierce fighting between rebels who want the Syrian government to step down and army forces loyal to the country's president.

But Obama says any plans for the army to use chemical weapons, like poison gas, could be disastrous.

Obama told journalists that he is monitoring the situation in Syria very carefully.

He's said that if chemical weapons were used in Syria it would make him think again about whether the USA would get involved in the conflict in the country.

He said he had "at this point not ordered military engagement".

Last month a Syrian foreign ministry spokesman said the weapons would never be used inside Syria.

The situation in Syria has been described as civil war.

Kofi Annan has stepped down as the Unites Nation's advisor on the Syrian conflict because his peace plan has been ignored.

The man who has taken over from him as UN envoy, Lakhdar Brahimi, has said he is committed to finding a solution to the problems in Syria.