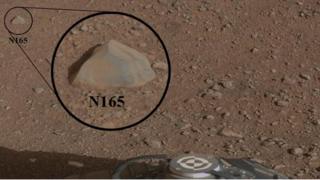 The robot exploring Mars has used a special laser to vaporise the surface of a rock on the planet.

Space agency NASA blasted the rock to find out more about what it was made from.

The Curiosity Rover has already sent pictures back from Mars and is now using a laser to further analyse the surroundings.

The first rock to be lasered was hit for about 10 seconds and chosen because of it's flat surface.

The robot has a mounted camera called ChemCam that recorded the moment the surface of the rock vaporised.

Scientists then studied the wave length of the material through a telescope which showed what it was made of.

•It's Mission is to find out if Mars ever had the conditions to support life.

•The Project costs $2.5bn and will last two years.

•It weighs 75kg and is 10 times the size of earlier US Mars rovers.

•It has tools on it that can brush and drill into rocks and scoop up and sort samples.

•It can also analyse chemistry in the planet's rocks, soil and atmosphere. 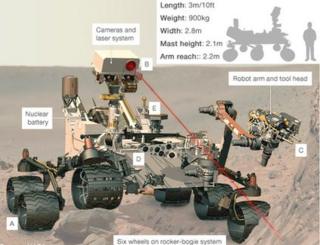