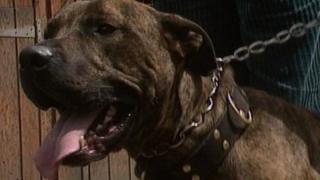 The owners of dogs who attack and injure people could face up to a year and a half in prison, under new guidelines.

Judges and magistrates have been advised to be much stricter with people who own dangerous dogs.

They could automatically be given six months in jail if their pet injures someone, with longer sentences for more serious attacks.

It comes after a rise in the number of people being treated for dog bites.

Previous rules meant lesser punishments like community orders, where people do work or chores in the their local area, were often handed out instead of prison time.

Owners who don't train or look after their pets properly can also be banned from keeping them if the animals become aggressive.

If dogs have injured someone a court could also order them to be put down.

"This tougher approach should serve as a stiff reminder to dog owners to keep their pets under proper control and to behave responsibly."

Some breeds of dogs are thought to be more dangerous than others and are even used as weapons by their owners.

The number of people having to go to hospital for treatment because they have been attacked by dogs has gone up by more than 3,000 since 1997, with children the most frequently treated for bites.

Some types of dog are actually banned in the UK and there are rules to punish people who own them. If someone owns a dangerous dog illegally they could go to prison for up to six months.