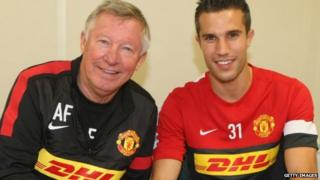 Robin van Persie has completed his £24m move from Arsenal to Manchester United.

The Dutch striker, 29, has signed a four-year deal and could make his debut at Everton on Monday.

He said: "It's an honour to sign for Manchester United.

"I am looking forward to following in the footsteps of so many great strikers, bringing my experience and playing my part to help the team compete for the biggest trophies in the game. I can't wait to get started."

It's not the only business Arsenal may have in the pipeline: 24 year-old midfielder Alex Song has been linked with a move to Barcelona.

Van Persie scored 37 goals for the Gunners in the last Premier League season.

The striker said in July that he wouldn't be staying with Arsenal because he didn't agree with how the club should move forward.

Manchester United manager Sir Alex Ferguson said: "Robin is a world-class striker with a proven record in England and in European football.

"His talents need no introduction to our fans. He has scored a number of goals against us in some classic battles with his former club. His movement, finishing and all-round ability are outstanding."

Manchester United, Manchester City and Italian side Juventus had all made bids for Van Persie.

The Dutchman has been at Arsenal since 2004.

A statement on Arsenal's website says: "Everyone at Arsenal would like to thank Robin for his contribution during his time with the club."