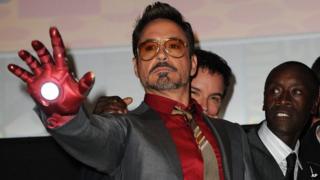 It seems even Iron Man isn't indestructible - star Robert Downey Jr has hurt himself whilst filming a stunt for the next superhero instalment.

Robert's ankle injury is only minor but filming has had to stop on Iron Man 3 while he takes time off to get better.

He's played Tony Stark/Iron Man in all three of the films so far, and Robert does most of his own stunts rather than relying on a double.

The first two films were a massive success with the latest in 2010 bringing in almost £400 million worldwide. The third adventure is set to be just as big.

It's a busy time for Robert - he's just confirmed he'll be returning to his iron suit for The Avengers 2.

The first film was a superhero bonanza. Iron Man teamed up with the likes of Captain America, The Hulk and Thor to smash box office records.