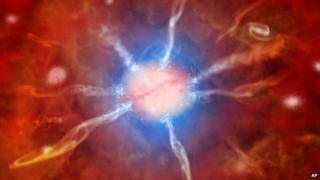 Scientists have found a new galaxy that they're calling a 'super mom'.

Using an special telescope they've found a galaxy that creates over 700 stars a year, which works out as more in a day than ours makes in a year!

The 'super mom', which is about 5.7 billion light years away, could help us learn more about how stars are formed.

It's not the only weird thing the discovery, at about 6 billion years old it should be too old to make any stars at all.

Stars are formed when hot gases in the middle a galaxy cool down really quickly.