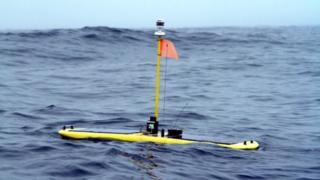 Marine experts in California have developed a new way to track down great white sharks.

They've made a surfing robot which can pick up on signals from tags on the animal's fins.

It doesn't look big but the yellow board has special glider that reaches seven meters down so it can get better data on the huge predators.

Shark fans can even follow the robots findings on their phones using a special app.

It can be hard to learn more about the great whites' behaviour because it isn't safe for scientists can't get close to them.

The robot has been designed to go unnoticed and can power itself thought the water.

The project has only been running for a week but has already spotted five great whites.