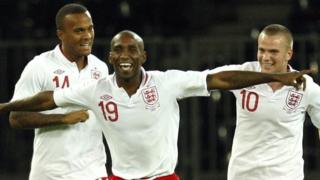 England have beaten Italy 2-1 in an international friendly, with Jermain Defoe coming off the bench to score the late winner.

The Italians went ahead early after Daniele De Rossi headed in a corner.

But England equalised thanks to another corner, with a diving header from Phil Jagielka just before the half-hour point.

Defoe then struck in the decider with 11 minutes to go.

It's good news for manager Roy Hodgson, who hasn't lost in seven matches.

Butland is now England's youngest ever goalkeeper at the age of 19 years and 158 days!