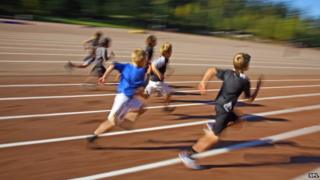 How much space for sport do you have at your school?

Rules on how much room children should have to play games have been changed.

Each school in England used to have to set aside 25 to 50 square metres of space for each pupil, depending on how big it is.

But now government ministers are saying that all they have to do is to make sure that there is a "suitable outdoor space" for kids to do activities.

Some people are worried that this will make it easier for schools to sell off their playing fields to make extra money.

Over 200 school playing fields have been sold off since 1999.

We asked you how much space to play games on you have at your school.

"I agree that school fields should be used more and made more available for us to use during playtime."

"At my school we have a tennis court, astro turf, a field and two sports halls. But I feel sorry for the schools that don't have much."

"Our field is not big enough. It used to be massive but now there's a portacabin on it and we are not even allowed to use it so we have got a tiny playground."

"At my school we have an astro turf field and about four fields. We use them a lot for sports like rugby, athletics, cricket and more! We also have a long/triple jump run up and sand pit on the back field - my school loves sport and would never sell our fields!"

"We have a patch of grass and a small hall where we only do P.E. once every two weeks."

"My school only has a playground and a hall which isn't very big so for sports day we have to borrow another school's field, because we don't have any grass."

"My school has a big playground, but all the boys play football and it hits people. We have a tiny bit of grass but it is slanted and we have a field down the hill but we only use it for sports day. I think we should use it a lot more!"

"We have a sports hall and cricket/cross country/football field, 2 astro turf netball pitches, 2 tennis courts and swimming pool all in the school grounds! If they take away our sports facilities things will change dramatically!"

"We have loads of sport at school but we don't have a big enough field for athletics! I wish we had a reasonable field so we could use it without having to borrow one."

"We have had got a tiny playing field that is not big enough to play football on but we do have 3 concrete pitches."

"At my school we have an astro-turf pitch and about 4 fields. We use them a lot for sports like rugby, athletics, cricket and more! We also have a long/ triple jump run up and sand pit on the back field. My school loves sport and would never sell our fields!"

"We only have a small square of grass and a sports hall where we only do PE once every two weeks."

"Our school has nearly a thousand students and a tiny sports field, tiny tarmac area and two cages. In order to hold sports day as well as long jump and other track events we have to borrow a field that we must run to."

"We have lots of room for playing, we have a basketball court and about 15/16 acres of field at my school, so we are all happy."

"At my school we have two fields and an Olympic sized astro pitch. I think we definitely have enough room for playing sport."

"At my school we have a sports hall, astro turf, playing fields, 2 basketball pitches, loads of space and lots of equipment."

"My old school's playing fields are far too small - it's hard to play different sports at the same time because there is simply not enough room!"

"We have a good sized pitch but we hardly use it so the council are selling it for houses - it's so unfair."

"We have a massive sports field and several courts for tennis, basketball and netball. I think we have more than enough space but I hope it won't be sold as we have around 1000 pupils and there will be less room for PE."

"We have a lot of space for sports at our school - we have four tennis courts which we also use for netball in the winter, We have a sports hall and a green field for rounders and athletics. Sometimes we go out to another playing field with proper athletics equipment."

"At my school we have a good sized play area, but they're selling the whole school to build houses on top of it."

"We've got no sports field at all, just the playground and the school hall, which we have to use for everything, including school dinners. If we had a sports field I'd do loads more sport."

"The only place where we can run is in the playground, it's tiny and there are 47 of us in my class! If I had a bigger playground I would do a lot more running."

"In our school we have about 450 people, but we only have a 7 meter football pitch - it's very annoying!"

"I don't think that my school has enough room to play sports games - we only have one football pitch with faded markings. For other sports we have to go to outside clubs."

"We don't have a proper field, so every year we borrow a field for sports day."

"We treasure our playing field at my school, we use it for almost everything in the summer, we can't sell ours because we have a moat/woodland at the back of our school."

"At my school we have two astro turf pitches and a playing field which is really good - we have eight hours of sport a week!"

"We have PE inside in our hall or outside in the playground, but we have a field for when we do our sports day. I think we should use the field more often because we only have our sports day once a year!"