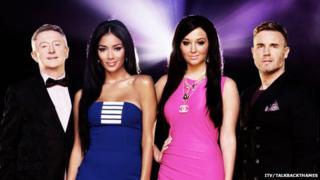 Louis Walsh has said he might not return to the X Factor after the next series because he doesn't want to do a Brucie.

The TV talent judge will return to our screens this weekend when the ninth series starts.

Speaking to a magazine, he said, "My ambition is to get to 10 years on the show - after that we'll see. I don't want to be like Brucie on Strictly. I will know when it's time to give it up."

Louis is the longest serving judge on the show after Simon Cowell left last year to concentrate on launching the X Factor programme in the US.

Joining him on the panel for the new series are Gary Barlow, Tulisa and new judge Nicole Scherzinger.

Meanwhile, the show's bosses have announced that the live final is heading north to Manchester. Last year, the final took place at Wembley stadium with girl band Little Mix crowned the winners.