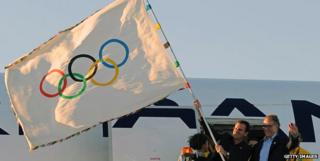 The Olympic flag has arrived in Rio in Brazil where the next Games will be held in 2016.

Mayor Eduardo Paes waved the flag after stepping off the plane with officials and athletes who competed in London.

Rio will be the first South American city to host the Olympics.