Check out our review of Brave 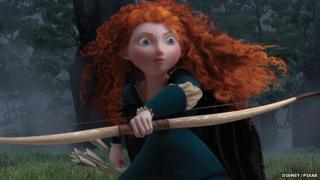 Brave is the latest Disney movie and is all about a girl called Merida, the daughter of a King and Queen who live in the Highlands of Scotland.

Merida doesn't like to stick to tradition and instead wants to carve her own destiny. But when she tries, things don't seem to go to plan...

Read Joe's review of the film below to see what he thought.

Brave is the latest animation film from PIXAR - the people who made the Toy Story films and Cars. This one is the first to be set in the past and it goes way back to ancient Scotland to tell a story involving bears, bows and arrows and badly-behaved princesses!

Here's our movie man Joe with the details.

When is it out?

The story revolves around a naughty princess called Merida who loves to roam the great outdoors riding her horse and firing her bow and arrow. This makes her mum very angry as she wants her daughter to be a nice little princess.

One day Merida's mum and dad (the king and queen) invite young men from around the kingdom to compete for Merida's hand in marriage but the princess doesn't want to play ball and causes lots of problems. That's when it all goes a bit wrong and the adventures begin.

Being an animation film, you can only hear the actors but you might recognise the voice of Lord Dingwall as he is played by the mega-famous Robbie Coltrane - yes: Hagrid from Harry Potter!

I think it's a hit. It's not a great story because it takes a while to get interesting and it's all quite easy to guess what's going to happen. So there are no real shocks in it but the animation is amazing. The way that they've created the landscapes of Scotland and drawn out the characters is brilliant.

I also liked Merida's three little brothers who are always up to no good trying to steal cakes and making a mess! There are some cool action scenes too where Merida shows how good she is with a bow and arrow - if she were in the Olympics she'd definitely get a Gold!

So overall I think it's a good film to see when you're in the mood to be amazed with your eyes but maybe not your brain!

P.S. Look out for the famous Pixar Pizza truck that appears in every movie from these guys. It's in the carpenter's hut- shhhhhhh!