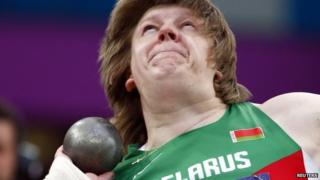 The women's Olympic shot put champ has been stripped of her gold medal after failing a drugs test.

Nadzeya Ostapchuk, from Belarus in eastern Europe, has been disqualified after officials say a banned drug was found in her urine.

All medallists have to get tested to help make sure people aren't cheating during the competition.

Valerie Adams from New Zealand, who had won silver, has now been awarded the gold medal.