London Olympics come to end with a party to remember 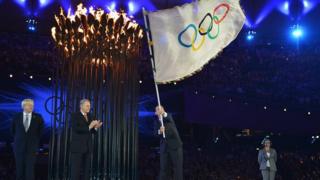 London 2012 ended in style as Britain handed the Olympic reigns to Rio in a spectacular closing ceremony.

The Olympic stadium was taken over by some of the biggest names in British music before the flame was extinguished and the flag given to the 2016 hosts.

One Direction, Jessie J and Take That were just some of the stars who performed for the 80,000 strong crowd.

It was a fitting end to Britain's most successful games in more than a century.

The London organisers made sure the next Olympic host has a lot to live up to as athletes like Tom Daley and Mo Farah danced away to other performances from Emeli Sande and Tinie Tempah.

The ceremony show-cased some of the best artists in British music both past and present.

David Beckham's wife Victoria was one of the stars of the show. She performed with her old band the Spice Girls zooming round the stadium on top of taxis.

The closing ceremony was a chance to celebrate the achievements of the athletes over the Games. The athletes marched out in one big group instead by country - it's a way of bringing everyone together as "one nation".

Some of the athletes entered through the stadium crowds giving the fans a chance to get closer to the stars.

The ceremony also saw London handing over the Games to the host of the next Olympics in 2016, Rio de Janeiro in Brazil.

They gave a bit of a clue as to what their games might include with a carnival-themed performance which included a road sweeper and a famous super model!

Team GB have won 65 medals at these Games - 29 golds, 17 silvers and 19 bronzes. It means Britain finishes third in the medal table behind USA and China, their best performance at an Olympics for more than 100 years. 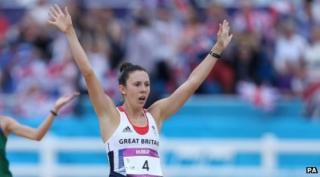 The final event of the Games, the women's modern pentathlon, saw GB win a silver from Samantha Murray.