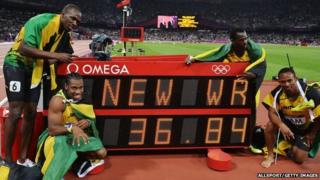 The Jamaican superstar ran the last leg and crossed the line in a new world record time of 36.84 seconds.

Nesta Carter and Michael Frater did two great first legs, but Yohan Blake blasted through the third to give Jamaica a clear lead. 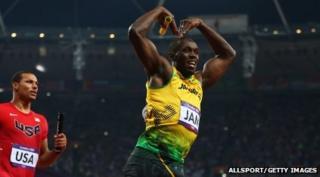 Allsport/getty images
Usain Bolt did the 'Mobot' as he crossed the line - to pay tribute to his mate Mo Farah!

He said: "It's a wonderful feeling to end on a high note. It was a great championships, I'm happy, the team came out and gave it their all, I wish we could have gone faster but we leave room for improvement."

Bolt's teammate Yohan Blake joked about their super speediness: "Basically, we are not human... We are from space, I am from Mars."