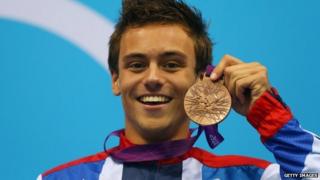 He performed six excellent dives in front of a sell-out crowd of 17,500 and was even cheered on by David Beckham.

Tom had a tiny lead going into the last round, but his two main rivals were both trying more difficult dives so it was hard for him to top the table. 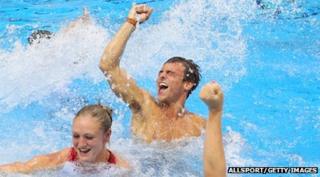 Allsport/getty images
Tom and his teammates celebrated by jumping into the pool!

But Tom was still pleased: "The main aim here was to get a medal. Olympic bronze medal - I can't believe it!"

The 18-year-old dedicated his Olympic medal to his father, who died last year of cancer.

He said: "I know that if he was here he would be very proud."

David Boudia from the USA won gold and China's Qiu Bo got the silver.