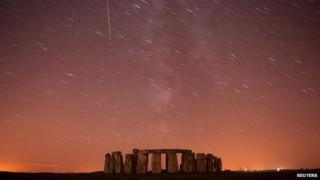 Calling all stargazers - the UK is set to enjoy a spectacular meteor shower this weekend!

It's the annual Perseid meteors and the best time to see them is on Sunday morning before dawn.

The Perseids are actually tiny pieces of a comet and the showers happen every year in August when the Earth passes through a cloud of the comet's debris.

They're bits of ice and dust, which can be as small as a grain of sand or as big as a pea.

The meteors hit the Earth's atmosphere at a whopping speed of 134,000 mph.

It's thought this weekend we could see as many as 100 meteors an hour!