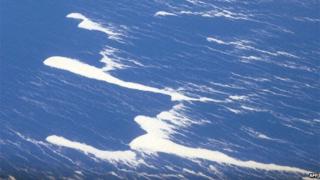 A huge 'raft' of floating volcanic rocks covering an area almost the size of Belgium has has been spotted in the Pacific Ocean.

It was seen by a military aircraft about 1,000 miles off the coast of New Zealand. 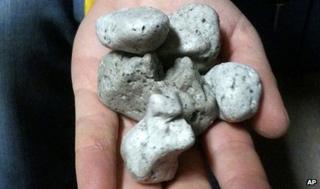 AP
Some of the pumice rocks from the 'raft'

A naval ship had to change direction to avoid the rocks, which were spread out over 10,000 square miles!

Experts reckon the rocks were formed by lava released from an underwater volcano.

It's an unusual event and one of the navy officers said it was the "weirdest thing" he had seen at sea.

The floating rocks, or pumice, were created when lava from an underwater volcano came into contact with the seawater.

The pumice is lighter than seawater - so the rocks quickly rise to the ocean surface.