New picture of Mars from Curiosity 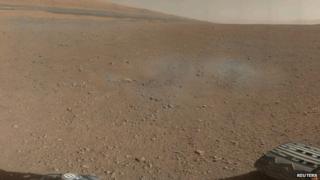 The robot which landed on Mars earlier this week has started sending back colour pictures of the planet.

The robot rover called Curiosity took this picture with a camera high up on a mast so it could get the best shot.

It shows a mountain in the distance that lies in the middle of Gale Crater, which is the area where the rover landed.

Nasa say the pictures are very low resolution but they hope to get more detailed ones soon.

Their aim is to get Curiosity to drive towards the peak of the mountain called Mount Sharp so the rocks can be studied in detail.

Curiosity is the fourth rover Nasa has put on Mars, but it's a lot bigger and more high-tech than the others and scientists are excited about what it could find.

It reached the planet at 6.30am on Monday after an epic nine month to get there.