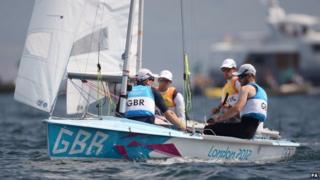 The men's team of Luke Patience and Stuart Bithell were the first to get a silver medal with Hannah Mills and Saskia Clark following in the women's.

Both pairs were already guaranteed a silver medal.

The men's pair led the other boats at the start of the race but Australia managed to take the lead. Argentina won the bronze medal.

Speaking after the race, Luke Patience said, "To stand on an Olympic podium, it's not gold, but we're young boys and we'll be back. We're happy, happy boys. What a place, we're in paradise. It's so cool."

Team GB's Hannah Mills and Saskia Clark lost out on the gold medal to New Zealand and the Netherlands won the bronze medal.